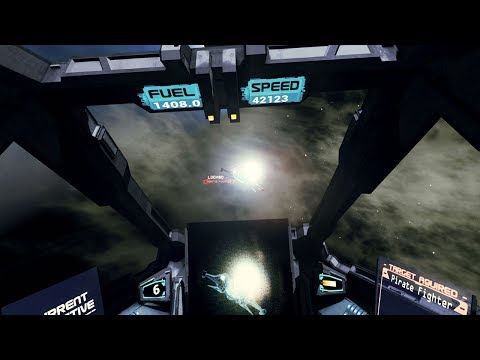 350 years in the future, we must unite and prepare to defeat a darkness which is about to consume our Galaxy. The extinction of the entire human race is almost upon us. We will depend on brave and skilled fighter pilots who have what it takes to join our elite forces and become a CDF Starfighter.

Key Features :
– REMASTERED VERSION – everything just got a whole better on a galactic scale!
– Unique and functional living cockpits with a variety of displays, functions and VR uses.
– A diverse and immersive Campaign mode to put you into the role of a CDF Starfighter in the Pirate War.
– Six degrees of freedom with a unique pick up and play control system.
– Dog-fighting, space battles and much more with 70 missions between game modes.
– Free flight mode for VR explorers and those who opt for no pressure or combat.
– Designed for VR from the ground up for a feature packed immersive game and experience.
– Build to real scale for a more immersive and believable universe.
– Perks, Ship upgrades and much more in campaign mode.
– 6 Different unique role-specific playable Ships.
– Vast and beautiful locations from the CDF Universe.
– Challenging game-play.
– Prove your worth with player rankings, stats, medals and more in scramble mode.
– CDF Database offering lore and information and lore on the Colonial defence force and its universe.

CDF Starfighter gives you the opportunity to become an elite starfighter pilot on an epic single player adventure in the CDF universe. In the remastered version you will play through a variety of training simulations, battle simulations and challenges with put you at the forefront of the game and story as an elite CDF starfighter pilot. Each of the 4 game modes offers a huge amount of content and fun.

Campaign Mode
The Pirate War Campaign offers a story driven and challenging 13 mission campaign. You take on the role of Lieutenant Rodgers who is posted to the CDF Churchill as the Pirate War starts. The campaign offers perks and fighter upgrades which can also be used in other game modes.

Simulation Mode
Simulation mode offers simulations and challenges and are designed to teach you the basics and give you practice in space battles and 7 diverse challenges. The Basic Training simulation must be completed in order to start a campaign.

Free Flight Mode
Free flight offers a no pressure flight with no enemies or objectives. You can use any of the 6 playable ships and pick any location from the CDF universe (14 maps). This mode is ideally suited for VR explorers and to try out and get practice in all the playable ships.

Scramble Mode
Scramble mode is instant action with stats, ranking and unlockable ships. With just over 30 different missions you must get kills and win missions to rank up, gain perks for Campaign mode and earn medals. As you progress through the ranks the missions will get harder and turn into bigger space battles.